Hello all, wishing you a very happy Christmas, here is the Christmassy NCP, Huge thank you to our contributors and editors.  Follow the link below:

Posted by Ger Doyle at 13:04
Email ThisBlogThis!Share to TwitterShare to FacebookShare to Pinterest


Welcome to our latest edition of the NCP - New Year, New Normal, New NCP.  Best of luck to our excellent out-going editors - Alex and Ciara and welcome to our New NCP innovators - Sophia, Aoibhín and Sophie.  A Huge thank you to all our contributors.  Please follow the link below and we hope you enjoy our latest edition.

Posted by Ger Doyle at 22:32
Email ThisBlogThis!Share to TwitterShare to FacebookShare to Pinterest


Hello and welcome to the first official day of summer holidays, crazy as it is to believe.  There is not much to be said, that has not already been said during these strange times.  Hopefully, this final issue of the NCP finds everyone safe and well.  We hope you enjoy this issue as a welcome distraction.  We want to bid a bittersweet farewell to our sixth-year students, we know the current climate is only a blip in what will be very bright and happy futures for you all.  Finally, a big thank you to Alex and Ciara for working tirelessly to get this final issue together remotely.  Have a great summer 😊

Posted by Ger Doyle at 00:53
Email ThisBlogThis!Share to TwitterShare to FacebookShare to Pinterest 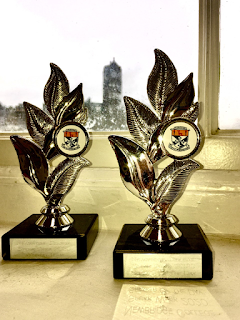 On Thursday the 5th of March the entire First Year group of students gathered in the Theatre for their Public Speaking competition, ‘Speak Week’. It was a wonderful occasion that saw over thirty finalists have their chance to speak out about issues important to them. With topics including Mental Health and Young People, Environmental and Economic Challenges for the Irish Agricultural Sector, School Policies, and, Charity Work, there was no shortage of interesting ideas explored and the audience, both students and staff alike, were hooked from the moment they took their seats.

Newbridge College has a long and proud tradition of Debating and Public Speaking. The skills involved in participating in such events include research, the ability to express an opinion clearly and persuasively, to see things from another perspective, to think logically and creatively and of course, the ability to grow in confidence as you learn to believe in yourself and what you have to say. We live in a world where social media has made it possible for anyone and everyone to air their grievances and base arguments on opinions rather than research and fact. We live in a world of ‘fake news’ where the general consensus seems to rest on people’s ability to aggressively target each other through the comment sections of various social media platforms. It seems that now more than ever we need the art of Public Speaking. 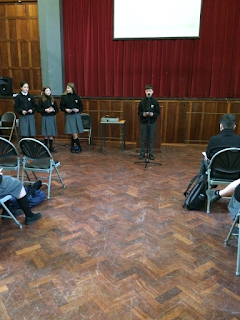 Team 1X who spoke about Creativity

As well as being a wonderful occasion however, this was also a very important one for First Year students. The word ‘Veritas’ forms part of the Newbridge College crest, and as every student knows, it is the Latin word for ‘Truth’. Learning to speak out in front of others is a special skill to have. All too often the truth never gets told because people are afraid to speak. This fantastic group of First Year students are now firmly on the path to having the skills and courage to speak the truth, to speak up for those unable to speak for themselves. To coin the famous phrase ‘The only thing needed for evil to triumph is for good men to do nothing.’ Being able to speak up, to speak the truth, is possibly one of the most important things anyone can learn to do. As St. John wrote in his Gospels, ‘The Truth will set you free.’

The team of adjudicators were put through their paces as they struggled to reach a consensus. It was close - the hard work and talent of each group made it very difficult to reach a final result. After much debate and re-checking score sheets, a decision was reached. One of the most difficult things about writing and delivering a speech is the need for creativity. The creative process is what allows speakers to connect closely with their audience but this is not always an easy thing to achieve. Yet that is exactly what the Winning Team, Ms. Scully’s English class 1X, managed to do. The fantastic four captivated their peers and the adjudicators with their inspiring speeches about creativity and the absolute need for the arts in our society. Congratulations to Lucy Harkin, Lily Crawford, Caoilinn McDonnell and Joshua Murphy. The second category, Speaker of The Day, was equally as difficult to agree on. Each and every one of the speakers delivered a speech that showcased hard work and determination, that was individual, interesting and compelling. In the end however, the adjudicators agreed that it was Ella Cullen from Ms. Storey’s 1Z English class who deserved the award. Her speech about Mental Health and Young People was fantastically prepared and beautifully delivered.
Congratulations to all of the participants and thank you for your hard work. Also a sincere thank you to the Transition Year students who assisted and to the adjudicators - your help was a key part of the success of ‘Speak Week’. Teachers, thank you too for your hard work and planning.  Finally, a special thank you to our Principal Mr. O’Brien, and Deputy Principals Ms. Bradshaw and Mr. Conroy for their support.


Posted by Ger Doyle at 21:29
Email ThisBlogThis!Share to TwitterShare to FacebookShare to Pinterest

Greetings and Happy February one and all!!!

Please click on the link to access the latest edition of the NCP.  It is full to the brim with thought provoking articles, the goings on in and around the college as well as a very special Newbridge College competition.  A huge 'Thank you' to Alex and Ciara for all their hard work and hats off to all our contributors.  Enjoy the read and don't for get to follow us on social media! 😉https://issuu.com/gdoylenc/docs/ncp_feb_2020_

Posted by Ger Doyle at 16:44
Email ThisBlogThis!Share to TwitterShare to FacebookShare to Pinterest

Welcome to the latest issue of the revamped NCP.  A huge thank you to our tireless editors Ciara and Alex for all their hard work. Wishing everyone a very happy Christmas