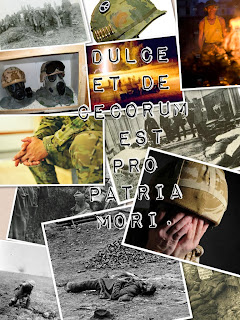 Ms. R Kelly's second year English class have been looking at the graphic imagery created by Wilfred Owen, in his poem Dulce et Decorum Est. Pic Collage is a very useful app. It is free to download and can be used for a variety of subjects. Take a look at some of these creations: 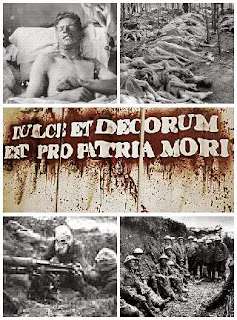 Posted below is a descriptive writing response written by a 5th year pupil from Newbridge College. The pupils were asked to write a piece in the descriptive style of F. Scott Fitzgerald. The piece was completed before we read any of chapter 4. We have been closely following Fitzgerald's nuanced descriptions so far in novel. Pupils were given some prompts before they began but the rest was up to them.

We sidled up next to the curb to come to a gradual stop. I was momentarily exposed to the lazy mid-day heat that smothered the city as Gatsby escorted me the short distance from his car to the unremarkable, heavy set restaurant which blended seamlessly with the much higher building of which it served as a cornerstone. I escaped the background din of the incessant city as I plunged into a much cooler interior. Gatsby took a moment to call to the bartender and half the bar before leading on down two low steps towards the semi-private back. There, the murky outline of a man brooded, his dark suit blending quite well with the dark ambiance of the place. As we neared courtesy demanded that he rise, and so he reassuringly did, standing as if it were a chore to be hauling such excellence and importance up this early in day. His ambitious waistcoat strained and struggled with the paunch it tried to conceal. His shady persona was reinforced when he made to pull my hand off as he shook it, and he languidly explained that he was Mr. Britchens , an old friend and inspirational figure to, "our man", Gatsby. Gatsby himself let the comment be, and made some airy, vague excuse about seeing to getting us some drinks as he drifted away. I awkwardly took a seat as I attempted to fathom Mr. Britchens apparent ignorance in simple manners. He was staring right at me. "So what do you do?" He demanded, after an uncomfortable amount of time. "I'm in bonds". He gave a knowing, condescending smile, reminding me how many other young men were flogging the same  dead horse. At that moment his eyes flickered over my shoulder, and I turned to see Gatsby coming to my salvation, three sparkling concoctions in his hands.
Posted by NewEnglishBlog at 12:42
Email ThisBlogThis!Share to TwitterShare to FacebookShare to Pinterest
Labels: L.C. Work, The Great Gatsby, Writing Skills


Last year I created a Popplet presentation on The Great Gatsby that allowed my Leaving Cert pupils to submit work to me at anytime, through Edmodo.  This year I decided to try the same task using new videos, a new web app and a new collection system. In the Stormboard below you'll find six videos accompanied by six questions. The questions differ in length and difficulty and culminate with an essay on The Great Gatsby. You may even just find the videos a good starting point for a class conversation or to help generate opinions on the novel. Maybe even create your own questions. I hope teachers and pupils might find it a helpful revision tool once they complete the novel.

(I'm using OneNote with my senior English class this year to collect essay and class work. I hope to write a review later in the year on how well this worked!)