Looking for some quick and entertaining summaries on Shakespeare's Julius Caesar? Then look no more. The good pupils at 3B Films have produced two video summaries on the play. The pupils have just finished studying the play as part of their preparations for the 2013 Junior Certificate.

No more sleeps until this year's edition of the College Press, as it's finally here. Jammed packed with all the latest news, reviews and articles that will have you reading so much it'll make you not want to open your Christmas presents! We hope you enjoy it and Happy Christmas from all the College Press team.

Posted by NewEnglishBlog at 13:16
Email ThisBlogThis!Share to TwitterShare to FacebookShare to Pinterest
Labels: College Press, Pupil

This is a Photo Story picture presentation of just some of the key moments from William Shakespeare's Julius Caesar. The Photo Story was created by a group of Third Years from Newbridge College. We hope you enjoy.

Often overlooked as a play at J.C. level, Julius Caesar is a play full of love, lies, politics and murder.The play has strong key moments such as the murder of Caesar and the climatic battle at the end. Strong themes such as friendship, loyalty and public vs private persona can be charted throughout. All of which makes Julius Caesar a great choice for your Studied Drama section in your J.C. exam. Listed below are some helpful links that may assist your study and/or revision of the play. We hope to add to the list in future so don't be afraid to get in touch if you find a good link online!

Mark Anthony's emotive eulogy to the Roman crowds, as performed here by the R.S.C., is just one fantastic moment you could discuss for your J.C. Studied Drama questions. (KEY WORDS: Rhetoric and Persuasion.) 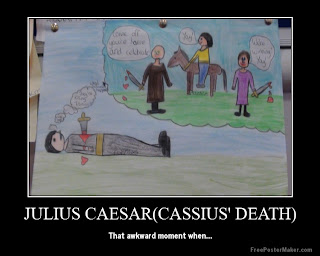 8. A Guide to Julius Caesar from The Literature Network .

10. Web English Teacher Collection of resources and lesson plans on Julius Caesar. An amazing list that will be of benefit to both pupils and teachers alike.


Characters are shaped by their cultural context. To what extent would you agree with this statement, with reference to the texts you have studied?

The society of a time indubitably dictates the personality that its inhabitants are expected to conform to; their behavior, their morality – even their appearance. The three texts I have studied – Children of Men (COM), Macbeth and The Road – each portrays a different facet of this idea, showing the effects of this influence on the characters existing within these diverse cultures. The Road depicts the world as it would be when all remnants of society have fallen apart. The cultural context of the Father and son forces them to lose some traits of humanity is central to their survival within their dystopia. The nightmare that is their reality leaves them no choice but to conform to the “Barren.Silent.Godless.” world, at least to an extent, if they have any hope of surviving. This idea recurs in (COM). - a culture on the brink of extinction, where the desperation pervading the world”since women stopped being able to have babies” is the driving force behind Theo’s and Kee’s mission. For them, it is the last chance to survive, and often it is the recklessness spurred on by this desperation that keeps them alive. Macbeth, while devoid of the anonymity created by the seeming irrelevance of existence in The Road, or the desperation to extend the lifespan of humanity in (COM), provides an extreme towards the other end of the spectrum. Macbeth’s tragic ambition is undoubtedly nurtured by his cultural context. Within it, it is the lack of anonymity that creates the pressure to ”dare do all that may become a man”, and the ambitiousness to climb to the top of the feudalistic ladder, to prove his worth. This helps shape Macbeth into the man that persists until his tragic end. These three texts show the profound effect societal structures, or lack there of, can have on a character both in terms of their actions and their personalities.