School's out for the summer! We wish all our JC and LC pupils all the very best in their state exams. It's a couple of tough weeks but the effort will be well worth it. For those of us lucky enough to be starting our summer hols why not kick it off with a nostalgic, insightful and funny look back over the 2012/13 school year!? The Summer Edition of the College Press is here. Well done to Mr Doyle for organizing such a wonderful publication for another year. A special word of thanks/well done goes to Sorcha & Ciara the editors. The College Press has been absolutely fantastic this year and you have helped set, with your fellow journalists, a really high bar for next year's team. 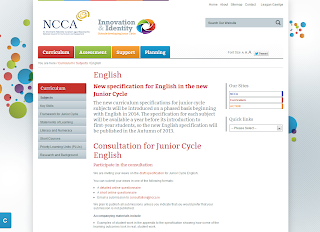 The NCCA are currently looking for feedback on a document regarding the shape of the new Junior Certificate English course for 2014 that they have entitled a 'Draft Specification'. I've gone through the document myself and posted a reply on their detailed online questionnaire. I'm not posting my own views in this blog post as I wouldn't like to unduly influence opinion and much more importantly the document is still at a consultation stage. It's obviously so so important that as many English teachers as possible get in touch to highlight any benefits, changes or worries/concerns that they may have with the new J.C. plans.

All the relevant links can be found here on the NCCA website.

Posted below is a general overview of the new Junior Certificate program the NCCA have made available to teachers with accompanying speaker notes.

JC Notes by NCCA
Posted by NewEnglishBlog at 12:46
Email ThisBlogThis!Share to TwitterShare to FacebookShare to Pinterest
Labels: Reviews, Teacher

Listed below are some tweets from the #LCetips13 thread on Twitter. The idea behind the thread is to post advice, links, comments and/or questions you might have about the Leaving Certificate English exam. With the big day fast approaching, it might just be the place to pick up that key piece of advice that gets you over the line to the grade you want. Thanks to all that have contributed so far. If you are a teacher with a helpful link/piece of advice please tweet it out using #LCetips13. If you are a pupil with a question on any particular part of the course feel free to send a question using #LCetips13 and you'll be sure to get an answer from at least one experienced teacher.


Earlier this month I set my J.C. English class the challenge of recreating a scene from Julius Caesar on Go Animate. The pupils were encouraged to interpret and change the setting and/or appearance but to stay loyal to the text from the play. So in no particular order here are the three winning entries. Well done to Sarah, Ross and Mike.

Julius Caesar: The Ghost of Caesar on GoAnimate


Congratulations to the Newbridge College Concern Debating team and their mentors, Ms Catherine Kelly and Ms Deirdre Murphy,  who won the Concern National Finals on Thursday 16th May in City North Hotel, Meath.  Grainne Carr, Chloe O’ Reilly, Ciara Maher and Jeffrey Hovenden Keane battled against an outstanding proposition from Ardscoil Mhuire, Corbally, Co. Limerick.  The two teams debated the very topical issue ‘The International Community must now take military action to topple the regime in Syria’. The Newbridge College team, opposing the motion, displayed a vast knowledge of the topic in both their speeches and rebuttal to emerge victorious on the night.

One hundred and twenty schools and over five hundred students took part in the competition this year and the College team has won eight debates in a row to claim their prize. As well as the trophy, the prize for the winning team is a trip to Ethiopia to explore Concern’s projects first hand.

The Concern Debates aim to promote a deeper awareness and understanding of global issues. It provides students with a public forum, to develop skills in research, presentation, debate and encourage students and teachers to become lifelong advocates on issues relating to poverty, justice and human rights.

Posted by NewEnglishBlog at 15:59
Email ThisBlogThis!Share to TwitterShare to FacebookShare to Pinterest
Labels: Competitions, Debating

Let me put my cards on the table straight away Leaving Cert. class of 2013: DON'T WATCH IT! This is not a film review ( I haven't even seen it yet!). It opens in Irish cinemas this weekend. I advised my sixth year class today not to watch. Not because I hate Leonardo DiCaprio, which I don't. Not because I can only hear Carey Mulligan's English accent every time she tries to feign an American one. And not because Tobey Maguire is generally annoying in movies, no comment.  I asked them not to watch it as it's not on the Leaving Cert. course this year. The Great Gatsby by F.Scott Fitzgerald is. Baz Luhrmann's The Great Gatsby is not.

Pupils using details from the movie in a Leaving Cert. essay is the ultimate fear for a teacher. I'm not going to patronise the vast vast majority of Leaving Cert. pupils. They just wouldn't do that. I've already heard Luhrmann discuss in interviews why he didn't have a Gatsby funeral scene. There was a cartoon expulsion of coffee from my mouth when I heard there was no funeral scene initially.
So I listened to the rest of the interview and although I didn't agree with the director's choice I certainly understood it. The idea that an under prepared pupil might go see the movie and then criticise Fitzgerald in an essay for not giving Gatsby a good send off (those that have read the novel know he doesn't really get a decent one anyway) is an idea that would genuinely give me sleepless nights.

Although that is the worst case scenario, this is not the reason pupils should not go see the movie. The reason you shouldn't see the movie is that these are Luhrmann's interpretations of the characters, not yours. I read the novel in college and in my mind's eye Gatsby is not Leonardo DiCaprio. Daisy is not Carey Mulligan and Tom Buchanan is certainly not Joel Edgerton. You've invested time and effort to learn about these characters. They should feel like people you know. Why? Well because if you know the characters (KNOW the characters as I bark to my pupils) it will give your Leaving Cert essay a vitality and honesty of effort that will make it rise above the rest. Yes question key words, PCLM and language range are all important but passion is quite often the x-factor between your essay being good and it being great. Seeing a movie adaptation of a literary work can irretrievably damage your love of a certain character.

So if you genuinely feel like you can seperate the movie and the novel just weeks before the Leaving Cert., go for it. I'm sure the movie is great. I just strongly feel you are denying yourself of a possible strength your essay could and should have: your imagination. Until the exams are over you can console yourself with the fantastic soundtrack that accompanies the movie. I've taken, for me, the stand out song from the album Florence + The Machine's emotive Over the Love and created some revision questions to accompany it. Scant consolation I know but trust me, it'll be worth it!

Q.1 Florence + The Machine make many literary referecnes to the novel in the song's lyrics. Choose two that you think are particularly effective in capturing the emotions of the novel. (10 Marks)
Q.2 'Now there's green light in my eyes'. The song's story is told from the perspective of Daisy. Would Daisy have made a better narrator than Nick? (10 Marks)
Q.3 'Cause you're a hard soul to save, with an ocean in the way' What do you think Florence + The Machine (speaking from Daisy's perspective) mean by this? (10 Marks)
Q.4 The song is called 'Over the Love'. 'The Great Gatsby is just a typical love story' Do you agree or disagree with this question? (10 Marks)

This is a publication I found on Scribd  that I thought clearly outlined many useful sites and ideas for Web 2.0 tools in the classroom. The piece clearly outlines how to use the web tools discussed and also highlights some of the educational benefits of using the tools. I hope people might find it as useful as I did.