Near the beginning of my fifth year, I was presented by Miss Carey with the opportunity to take part in the Rotary Youth Leadership competition. Though I wasn’t quite sure what exactly Rotary was or the details of the competition, I took an application form – this proved to be one of the best decisions I’ve made in a long time. After three stages of interviews at School, District and Regional level, I was delighted to win a trip culminating in a visit to the European Parliament in Strasbourg.
On 25th of January I headed to Connolly Station in Dublin to get a train to Belfast with six other people I had never met before. After the two hour train journey full of chatter and laughter, we found our way to Jury’s Inn which would be our Belfast home. After checking in with Rotary, we waited as the rest of the twenty-four participants arrived over a two hour period.
After a quick shopping trip we headed back to the hotel where we had a meeting about the week that lay ahead of us and what to expect. We had already been given the topics which would come up for discussion in the European Parliament. We all chatted late into the night, getting to know other participants from around Ireland, both North and South. 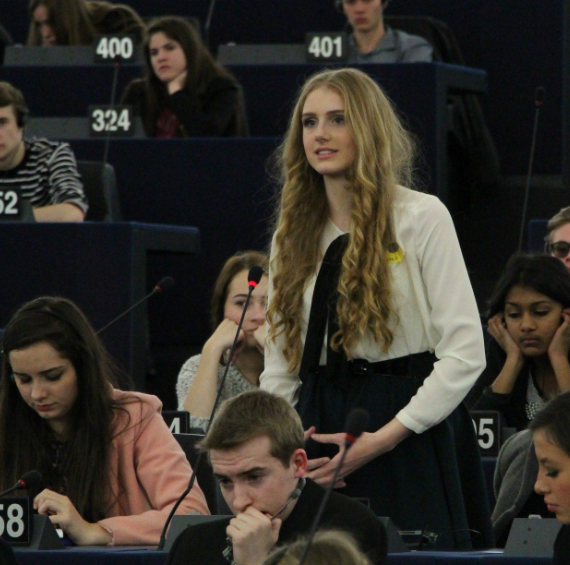 After getting up at 7:30 the following day, we packed our suitcases, loaded them on to the bus and made our way to the European Office in Belfast. There, we were given information about the EU Commission and had a question and answer session. We took some photos, gathered some booklets that would help us learn about our given topics for the EU Parliament and then made our way over to City Hall, a fabulous building. We were invited up to the Mayor’s Parlour we had tea and biscuits. We then got a bus to the Northern Assembly in Stormont, where we got a short history of the building and then had a rather interesting question and answer session with some Members of the Legislative Assembly. The Assembly was in session, so we watched that for some time and started our journey down to Dublin.
Following arrival at our hotel in Dublin we began to present speeches to the other students to see who would represent Ireland in the European Parliament in Strasbourg. I was privileged to be one of the four students selected to represent our group to the hemi-sphere in the Parliament.

We had another early morning on Tuesday, waking up at 7 o’clock. We headed out to the EU Parliament offices where we were individually filmed explaining what we would do in Ireland if we were Taoiseach. Afterwards, we had another question and answer session which would help us in Strasbourg. Our next destination was Leinster House where we had a tour of the building and a question and answer session with TD and Minister for State, Simon Harris which was really interesting. We rushed back to the hotel, gathered our luggage and travelled to Dublin airport where we boarded a plane to Frankfurt en route to Strasburg.
We set off at 8a.m. next morning on our three hour journey to Strasbourg. We arrived at our hotel, dropped our luggage off and were let loose in the city centre. It was gorgeous, almost like a postcard city. A group of us had a look around and had a lovely lunch in a little French café. We then split up and went shopping before heading back to the hotel where we gathered in the meeting room. We preformed our “Introduction to Ireland” piece several times, and then we split into our groups again and prepared for our presentation in the European Parliament.
We were up at the early hour of 5:45 on the day of the Euroscola, the competition at the heart of the trip, before departing for the EU Parliament. After going through airport-like security, we settled in the restaurant for some hot chocolate as we waited for the other twenty-two countries to arrive. Soon enough we started filing into the hemi-sphere, which is the main chamber in the Parliament. There was a short introduction and the presentations began. We were sixth up, and it wasn’t long before I found myself standing up to walk to the podium.  It felt so invigorating to stand there speaking about Ireland to such a vast number of people – this was the same podium we see European leaders standing at on TV – what an honour! After all the presentations were over a question and answer session took place with incredible Irish representation with over half of the overall questions posed by my colleagues. We used the voting system to vote on several topics so we got accustomed to how it worked. 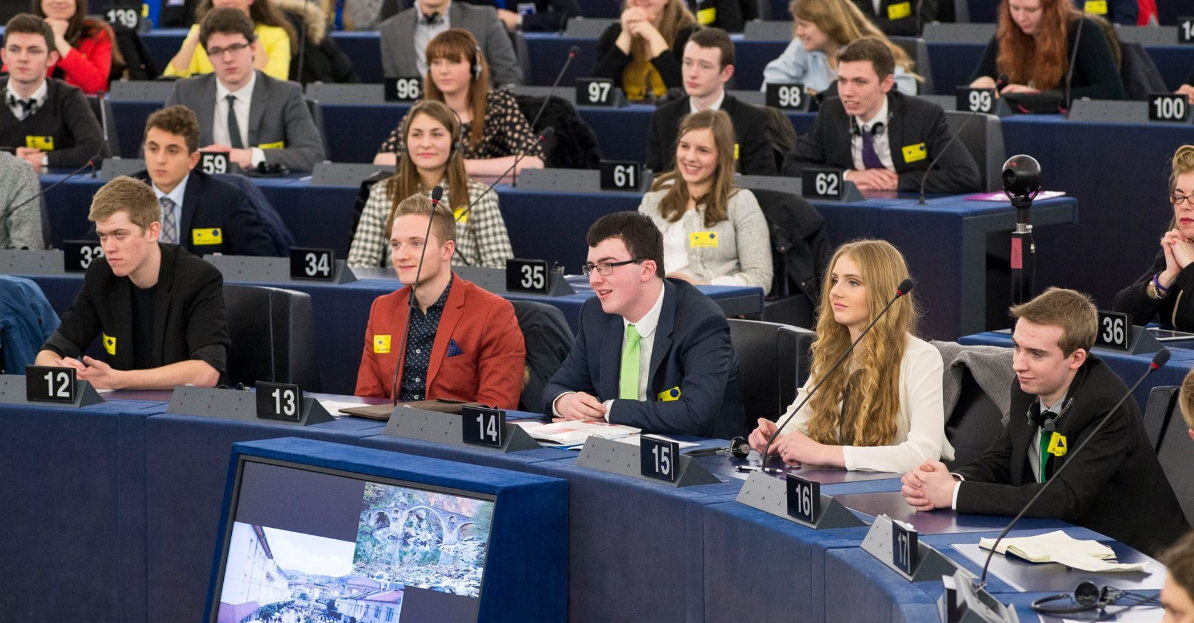 After lunch we split into our six groups according to our topics, and went to smaller chambers to prepare for the group’s presentation. My group’s topic was Integration and Migration in the Euro-Mediterranean region and an Irish student was deserving to be elected as spokesperson for our group. We broke into smaller groups and discussed ideas to bring to the spokesperson, and then began presenting our ideas and discussing proposals. It was soon time to return to the hemisphere for the presentations. The pride I felt when I looked down to the centre of the room and saw that seven of the twelve spaces for the main speakers were occupied by Irish people is indescribable! The spokespeople (four of the six which were Irish) began to put forward their proposals and after they did so the floor was opened to questions. I managed to ask two questions of the spokespeople. After each round of questions the floor voted on whether or not they supported the proposal.  The occasion was over all too soon, and we climbed onto our coach, on a high once again, and headed back to the hotel.

We went out to a French restaurant for dinner and were treated to a three course meal as celebration. Once we were back in the hotel, we all gathered together and listened to some great musical talent from the group, watched a spectacular Irish dance and shared our experiences from the trip. Tears began to flow as the realisation that the trip was coming to an end dawned on us!

As a result of a very late night we ended up having our breakfast on the bus to the airport and sleeping on the plane home. As we collected our luggage there were more tears - I hated leaving the people I had gotten to know so well over a week and with whom I had shared such an incredible experience. It completely surpassed all expectations I had, and I can’t thank Rotary enough for having given me such a wonderful opportunity.
Posted by NewEnglishBlog at 10:53
Email ThisBlogThis!Share to TwitterShare to FacebookShare to Pinterest
Labels: Awards, Public Speaking, Pupil

Eggstra, Eggstra, read all about...here it is!

Posted by NewEnglishBlog at 08:52
Email ThisBlogThis!Share to TwitterShare to FacebookShare to Pinterest
Labels: College Press, Pupil

On Tuesday the 24th of February 2015, the Kildare County Council offices saw six teams of budding debaters arrive to participate in the Liam O’Connell Annual Debate. We sent along two teams, one made up of members Hannah Egan, Roisin King, and Jenna Brannock, and the other Caitlin Breen, Fionn O’Sullivan, and Sadhbh Donoghue. Holy Family, Clongowes, Rathangan and Gaelcholaiste Cill Dara also took part. 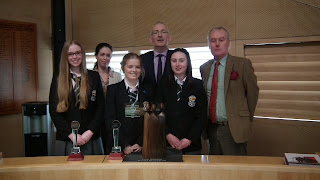 This particular debate was established by the late councillor Liam O’Connell. His particular focus was on encouraging the youth to use their voices in relation to politics. His aim was certainly met on the day, with eighteen TY students contributing to a heated discussion. The motion was “Political Protest Aims to Subvert Democracy.”

Each team opened with a six minute statement. Hannah, Jenna and Roisin, as proposition, argued that political protest is not always safe, and that “swarm” mentalities stand to represent the needs of just a select portion of the population. The opposition of Fionn, Sadhbh, and Caitlin contended that political protest is crucial to ensure that all of society is heard and has their needs met. The floor was then opened to a lively open discussion. Once we all figured out how to switch on the microphones, it ran quite smoothly! The prize for best speaker award went to the captain from the Gael Cholaiste.  Roisin, Hannah, and Jenna were then shocked and delighted to learn they were taking home the prize for best over-all team. They received a crystal trophy each, and a perpetual plague for the school. They winning team appeared in the Leinster Leader and on KFM.
The standard from each team was extremely high, and the debate was a thoroughly enjoyable experience for all! Many thanks to Miss Carey for all her help.